Few problems cause as much grief in the press industry and those of us who feed into it as "proofing". In some part at least, money is the source of all the evils here. A mismatch between proof and final job usually involves money for remedial action or loss of business from a disgruntled client. Proofs of all kinds are representations (either on a monitor or on paper) of how a final rendering of a job will look. Proofing is all about the integrity of an image or document. Integrity can mean the words, the colours, the quality, the arrangement on the page or combinations of these. A job is scrapped if the picture is the wrong colour or if it is upside down - proofing is intended to spot either error, before the final job is run. In DTP, the very simplest proof is a copy of the text to ensure that the spelling is correct and that the words actually make sense. Other variants of proofs are more complex and fall into two categories, analogue and digital proofs.

Analogue Proofs usually use the same technology as the printing press and usually employ the same separation films and/or plates or both. Digital Proofs use a machine other than the press to mimic press behaviour, providing a cheaper but slightly less reliable method of predicting the outcome from the press. Over recent years the arrival of fast digital printers has enabled the proofs to be made in exactly the same way as the final job will be run. They have also allowed variable content printing in which successive "drops" of the press will print a different version of the artwork, for example with a specific name and address.

Analogue Proofing In analogue proofing, the same type of technology is used to create the proof as will be used to run the final job on a press. From the DTP layout, an Image Setter is used to create films with which to make the printing plates or to make the plates directly (in the so-called Computer to Plate, CtP, technology). To analogue proof, these same films or plates are used to make a proof. The two main methods are the Chromalin Method or WetProofing. The Chromalin system has been superseded by WetProof and both are Dupont products. In this process, the actual films are used to create a single proof in a process which takes about an hour (i.e. not cheap!). In traditional wet proofing the actual plates are used on a slow manual press, again taking lots of labour. Wet proofing is about as close as it is possible to get to running the real job as the same plates, inks and paper stock may be used. Progressive proofs can be made by this method which are 7 paper proofs showing

Progressives enable the press operator to check the output from each part of the process and compare it .

The main advantage of analogue proofing is that it reveals problems of moire fringing which occur from the interaction between the pattern of half tone dots and the image structure. Obviously with a proofing method that does not exactly mimic the half tone structure no warning of moire will be flagged. There are a number of proofers which accommodate the need to check the half tone structure, the most common of which is the IRIS proofer. 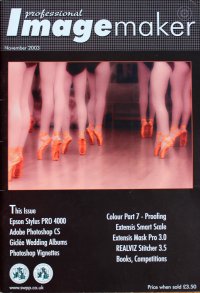