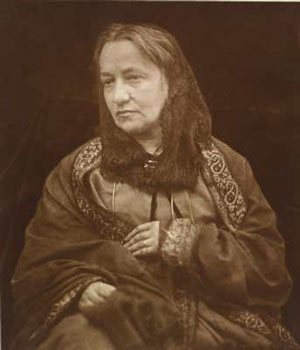 The big news announced at the end of January, however, is that more than400,000 objects from the Science Museum Group will join the Victoria andAlbert Museum's collection of half a million photographs in order to createthe world's foremost collection on the art of photography. The InternationalPhotography Resource Centre will contain almost a million objects in totaland will become he largest collection on the art of photography in theworld. This consolidating move will reunite the two Julia Margaret Cameroncollections currently on show separately and divided by Exhibition Road.Hopefully this will mean that one day in the future this pioneering womanof art photography will be afforded an exhibition that takes up more spacethan a single room.

The main collection of photographs on show at The Science Museum isknown as the Herschel Album. These prints have the exciting claim to beingthe first time that photographs had officially been classified as works of artin Britain. In 1975 the Reviewing Committee on the Export of Works of Artblocked the export of the album to an American collector, allowing a publicappeal to be launched and the photographs saved for the nation. Laterin 1987 the album was taken apart by conservators to prevent the fragileprints from deteriorating and this also enabled museums to display thecontents of the album.

I had expected The Science Museum to live up to its name in many ways,providing a technical look at Cameron's photography. I hoped for detailabout the processes she used, the challenges she overcame, and potentiallythe scientific reasons as to why Cameron should be our Victorian portraiturehero. But instead I was quite disappointed; although the work was, ofcourse, utterly beautiful. And it was well displayed too - logically spirallingaround the room taking each print in the order that Cameron assembledthem within the album. However, it was the commentary provided thatdisappointed me throughout the exhibition.

Comments on Cameron's personality come quickly, with Plate 5 telling usthat 'She was caustic and candid of tongue'. Plate 18 discusses her familysituation 'one of seven daughters of James Pattle, an officer in the Bengalcivil service' and then goes on to let us know that Cameron was the uglychild in the family: 'all were blessed with good looks, save Julia'. Again onPlate 29 Cameron's 'temperament' is discussed, while Plate 33 talks abouther niece's husband having a homosexual affair and becoming embroiledin scandal.

Why have I highlighted these comments within this article? Because quitesimply I do not think that such gossipy remarks would have beenwritten about a male photographer. In an exhibition about such anincredible success story - teaching oneself early photographic technologyand photographing work that has such a deep personal vision withinjust a year of receiving a camera - these comments about Cameron's life,personality and even her looks have no place. I urge you to think hardabout the potential motivations behind the curation when you're seeingart exhibitions, for they are usually about more than the pictures you seeon the walls.

Verdict: Go for the prints but ignore much of the commentary.