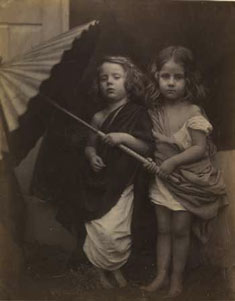 Almost everything about the exhibition at the Victoria and Albert Museumis a polar opposite to the exhibition at The Science Museum. Eventhe walls are painted a deep red rather than a clinical white, allowingCameron's work to be seen against what might be considered a moretraditional Victorian setting. This exhibition not only marks 200 years sinceCameron's birth, but also 150 years since the first exhibition of her workwhich was held at the South Kensington Museum (later the V&A) in 1965.

The prints on show at the Victoria and Albert exhibition are incrediblyvaried - more so than those at The Science Museum. The show isdivided into several parts, separating Cameron's portrait work from her'Madonnas', and there's even a wall dedicated to her failed misprintsthat have been collected over the years. The information provided in thegallery looks to explore the way that Cameron made prints - discussingthe wet collodion process and how she might have approached themaking of her albumen-silver prints.

The V&A website provides a video of an interview with the exhibitioncurator Marta Weiss who talks passionately about the artistry thatCameron expressed through her images - and that genuine excitementcarries through into the exhibition commentary and even the intoarrangement of prints on the walls. At no point does seeing all of theprints in the gallery feel like a chore, there is simply something new andexciting to move onto every step of the way. 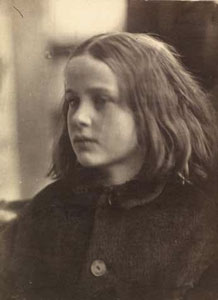 As a museum of craft, design, and industry the V&A often explores thedifferences between hand-made and machine-made objects and thisexhibition is no exception. It subtly asks questions about why we expectour photography to be so 'perfect' rather than show traces of the artistshands. In an increasingly digital world this train of thought is going tokeep slipping to the forefront of our minds and is indeed something weare already seeing happening in photography with the movement back tofilm and 'imperfect' toy cameras.

You really get a sense of an individual artist in the V&A exhibition,especially since it also includes experiments and even failures. Cameron'sartistic vision and refusal to bow to the 'standards' of the time shinesthrough and the treatment given to her as woman artist here is the sameas the treatment given to male artists within the sacred walls of theVictoria and Albert Museum - something that I'm sure would have greatlypleased the museums namesakes.

Verdict: A celebration of one of the leading lights of fine art and portraitphotography. Keep an eye out in the future for the V&A producingmore exhibitions on Cameron with the new amalgamated photographycollection.

Dimbola Lodge, Freshwater, Isle of White is open throughout the year, butcheck opening days and times on their website before visiting.


Please Note:
There is more than one page for this Article.
You are currently on page 4 Contact Charlotte Moss