In the general scheme of things the Photoshop user's progress moves from Layers to Channels and eventually to Paths as they acquire mastery of the software. Many never make it that far, some only get as far as layers and some not even that distance! A test question I use at seminars to judge the experience of a group is to ask how many of them use paths. If the answer is more than a couple this is a surprise, often there are none. This is a shame, paths have much to offer.

They are , however, difficult to master, but, like riding a bike, once you have done so you never forget how to do it! For a beginner, making a simple shape such as a symmetrical heart can be quite daunting. On the other hand once mastered the task of cutting out things such as cars, bottles, products, musical instruments and windows is much simplified. Note that the examples are all man-made, engineered products. These lend themselves particularly well to paths, frizzy hair does not! Paths should be regarded as a first step in many cases for montage with refinement of edges being carried out once masks have been created from the paths. 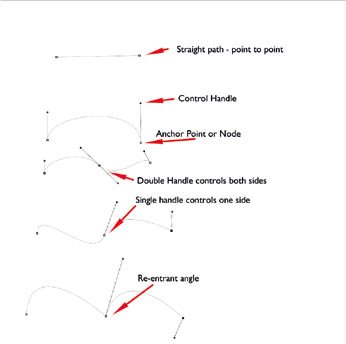 Paths have a variety of interchangeable names. They are drawn with the Pen Tool and are variously called Paths, Curves, or Bezier Curves (see call out). The characteristic that paths in all software share (and they appear in Photoshop, Illustrator, InDesign, CorelDRAW, and Corel PhotoPAINT to name just a few) is that they are 'vectors'.

This means that their shape or progress across the image or page is mathematically defined, and totally independent of the image resolution. A vector that is an inch across will have exactly the same smoothness of shape when it is blown up to a mile across, all that happens is the numbers in the equations get bigger! As shown in the diagrams, paths are specified by the positions of their 'nodes' or 'anchor points' and by the curvature of the line running between anchor points. There is no real limit to the number of nodes that may be used to define a path, an engineering illustration of a building, for example, will contain hundreds of thousands or even millions of nodes and curves. Before computers acquired the power that they have today there were issues if too many paths arrived with a Photoshop file, but these problems are things of the past in general.