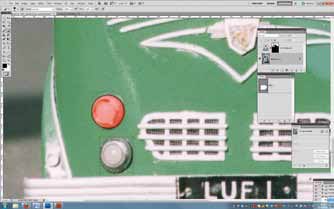 When Not to Use Paths

Paths are difficult to deploy and should only be used where their specific advantages are vital. Take a car headlight as an example (an old-fashioned circular one that is). Drawing a path round this is quite skilful; a better way to create a mask for this is to enlarge a circular brush until it matches the size of the headlight exactly and use one click of the mouse to form the mask. When carrying out this procedure it is best to use the square brackets ( [ and ] ) to increment the brush until it fits. A similar tactic is to build mask shapes with a succession of single brush 'blobs' of different sizes, and elliptical shapes, to match the requirements. There are two variations to this method. One is to make a circular selection but hold down both the Alt key and the Shift key so that the circle is drawn from the centre. The other variation is to make a rough selection and then use Selection>Transform Selection to shape the marching ants to match the contours of the headlight bezel. This method is effective for elliptical shapes also and the selection may be bodily moved to align correctly - again this is quicker than drawing and adjusting a path.

Walking Along the Path

Paths may be used to control the movement of a brush across an image. If the 'Stroke Path' icon is clicked at the bottom of the Paths Palette the currently selected brush, using the current foreground colour is stroked along the path. They may be used to run a brush around a pathed area and this includes brushing around an alpha channel to modify the edge properties of a mask. In truth, today, the refine mask edge tools are so sophisticated that you would probably only rely on this method if you were using a very old legacy version of Photoshop. The clone tool may be run along a path in tasks such as removing power lines from a sky. 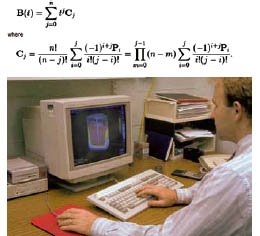 Pierre etienne Bezier (September 1, 1910-November 25, 1999) was a French engineer and one of the founders of the fields of solid, geometric and physical modelling as well as in the field of representing curves, especially in CAD/CAM systems. Born in Paris, Bezier was the son and grandson of engineers. He obtained a degree in mechanical engineering from the ecole Nationale Superieure d'Arts et Metiers in 1930. He earned a second degree in electrical engineering in 1931 at the Ecole Superieure d'Electricite, and a doctorate in 1977 in mathematics from the University of Paris.

As an engineer at Renault (for 42 years), he became a leader in the transformation of design and manufacturing, through mathematics and computing tools, into computer-aided design and three-dimensional modelling. Bezier patented and popularised, but did not invent the Bezier curves and Bezier surfaces that are now used in most computer-aided design and computer graphics systems. The Bezier curve was adopted as the default curve definition algorithm in Post Script language and hence its prevalence in Adobe products such as Photoshop, Illustrator and InDesign.

We owe more to Bezier than we might imagine. Almost every product we buy that has moulded shapes will have been defined using a Bezier curve, about the only thing not on the list are food products but even they might be packaged in plastic, the shape of which will likely have been designed on a CAD system.

Bezier curves are mathematically quite simple: the end points (nodes) of the curve are defined in their position and then an equation describes how the curve snakes from one node to the other (including, possibly as a straight line). Things get more complicated when we talk 3-D surfaces but these days computers eat this sort of stuff as a snack?

This is the equation for a polynomial Bezier curve. Remember it well, we will test you the next time we meet!

This 1995 image shows a CAD system in use designing battery cells, complete with Bezier curves!