This is possibly the most exciting of the techniques described in this feature in that the enthusiasts out there are starting to develop routines and setting values to mimic a number of monochrome effects. In the opening dialoge box of RAW you have a slider with which to reduce the saturation to zero, thus creating a monochrome rendering. The settings at [A] (see right) are those to create a well-adjusted colour image. The clever bit is to open the Calibrate tab [B] and adjust the values to create a mimic of particular monochrome contrast filter - in this example an orange filter, using the values listed below.

Red, green and blue filter effects are also tablulated. The method did not create any artefacts and has the advantage of being able to be run from Bridge as part of your workflow. You may also save out your converted file in 16-bit mode. 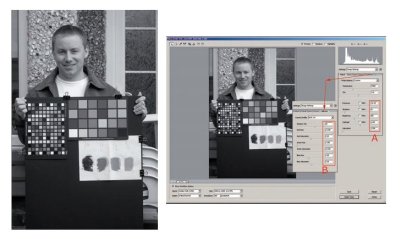 The Channel Mixer gets a mixed press! Many practitioners seem to devote their time to developing methods to avoid using it. However, it has great versatility and, as the method may be readily converted into an action, it can be repeated and automated. As mentioned earlier, conversion to Grayscale takes a channel mix close to 30:60:10 for red, green and blue respectively. However we found a posting on the Digital Black and White forum from a gentleman called John Vitollo, who listed the settings in the table (right), for mimicking particular film stock. The down-side of this listing is that it pays no attention to the response of the camera chip, but it provides food for thought and further tweaking.

Traditional black and white specialists always carry coloured filters to bend the tone response of their monochrome emulsions. This might come as a surprise to newcomers to photography who have been brought up on digital. The common filters and their historical uses are as follows


Please Note:
There is more than one page for this Article.
You are currently on page 5 Contact Mile McNamee