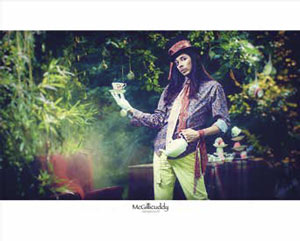 GO ASK ALICE
The biggest challenge when you set out to do something creative isthe fact that you have to live up to that expectation - there would benothing worse than ending up with something a bit predictable. Soin a sense I was actually handicapping myself by choosing an Alice inWonderland theme, because it's been so thoroughly depicted by artists inall forms of media from films to music to videogames.

For someone who always talks in seminars about "stacking the odds in myfavour", it might seem a bit unusual that I was trying to be creative usingsource material that already seemed to have shown us everything it has tooffer. But that's the reality of being a commercial photographer; whetheryou're shooting fashion or portraiture or product shots or anything else,you're shooting stuff that's very similar to what other people have shotbefore.

So the thing to remember is that it doesn't matter if the stuff itself issimilar; the secret is to be able to see it and shoot it in a way that nobodyelse has done - or better still, in a way that nobody else can. Remember,"Imagination is the only weapon in the war against reality," and yourimagination is almost certainly the only thing in your photographytoolbox that is exclusively your own. So use it!

For me, I had a load of different ideas in my head of how I wanted to stylethe models, dress the set, use the light to tell my story - but my biggestbrainwave came when I decided to do something completely crazy withmy main character. Since I wanted my version of Wonderland to be totallykooky and weird, I thought it would be interesting to portray a "FracturedAlice" using a male model!


Please Note:
There is more than one page for this Article.
You are currently on page 2 Contact Damian McGillicuddy