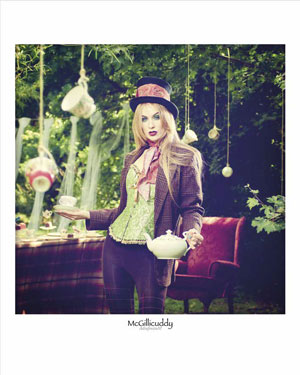 ... TO CREATION
Since I was shooting entirely outside, I used my Profoto B1 with a parabolic umbrella as my key light and a B2 as my accent. This enabled me to use the natural light as fill, which gave me all the benefits of shootingoutdoors while maintaining the control you get in a studio - and alsoguaranteed that I wasn't at the mercy of the elements by using the sun asmy key!

I used the same basic lighting set-up for most of the shots, onlyrepositioning slightly depending on the number of models and theamount of the set in frame, so if you'd like to see how I placed them thenvisit our YouTube channel (www.youtube.com/user/BigDogsTopTips). Werecorded a behind-the-scenes video live on set where I walk you throughthe lighting used, so it's worth taking a look!

As you can see, we shot a few variations on the theme with two of the models alternating between the Alice and Mad Hatter roles. You'll note that the female model is styled exactly according to the concept sketches,while James' look deviates. That's the brilliant thing about having a longworking relationship with good models; I knew that he would be able toarrive on set and piece together something suitably cool for his turn as theMad Hatter. That spontaneity is a big part of the creative shooting process,but it was only possible because we'd planned concepts in advance - it'sthe planning that makes the free-wheeling possible.

With all the pieces in place, it was time to let loose with some of myfavourite creative tools. I put both the 7-14mm f/2.8 and the 8mm f/1.8Fisheye PRO lenses through their paces, making use of the super wideangledistortion to add to the hallucinogenic feel of the pictures. But theone I really couldn't put down was the 55mm OM lens, which producedsome outstanding results! Thanks to the Focus Peaking of the OM-D, thisvintage lens got an injection of 21st century technology and producedpin-sharp pictures. An old school classic with a new school twist... soundsa bit like me!

So there you have it, an ultra-creative shoot and easily one of the besttimes I've had behind a camera in years. If you want to see and getinvolved in the creative process that goes into a real-world commercialphotoshoot, that is exactly what the Olympus BIG Shoot Experience is for!Photographers using all makes of camera can come along for just £145and join us on a full day of commercial shooting.We work to a themed brief, just like this one, and the pictures I shoot willbe published, so you get to shoot publication-standard images and beinvolved in the process from concept right through to creation. BIG Shootstake place approximately every six weeks, so check out the events onwww.damianmcgillicuddy.com to see what we're up to for the next one!Thank you for reading, and remember: I may be entirely bonkers, but I'lltell you a secret: all the best people are!

Till next time,
McGillicuddy


Please Note:
There is more than one page for this Article.
You are currently on page 4 Contact Damian McGillicuddy