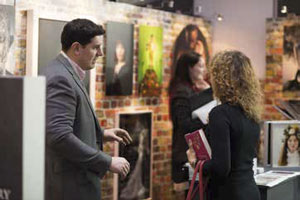 Our very own Angela Adams was the first panel that I caught on Wednesday morning, and what a panel it was! A war-torn, fantasy world crafted by Angela herself with an incredible historical, science-fiction narrative. Not only didshe create the concepts and of course the photographs, but she also went oncourses to learn how to make armour and the other props she required. Soher models were all dressed in her creations, lit by her hand, photographedand retouched by herself, and the quality just sang through. Angela received aunanimous pass with great comments from the judges all round.

You never know what you're going to get when you spend a day in thequalification judging, and next up was Adrian Henson's Science and Naturepanel. Cicadas and beetles were the stars of the show - or angels and devilsas Adrian referred to them. Amazingly they were lit Heath Robinson style, withtwo five-gallon buckets and some LED strip lights. Adrian's subjects were alabour of love, it took him three months and over 100 pins to painstakinglyrepair and arrange his specimens, and the most beautiful exhibit nevereven made it into the gallery because it disintegrated before it could bephotographed. I'm sure at some point we'll see the behind-the-scenes photosfrom Adrian; none of us could quite believe that his Fellowship panel, whichwas also a unanimous pass, was photographed quite the way that it was. 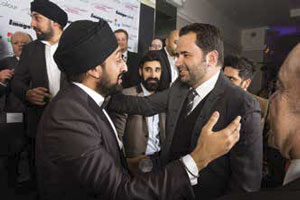 Meeting David and Like Edmonson was one of the highlights of my Convention.Over from the US, they brought their own brand of fine art work to both thequalifications and the competition. As well as both passing their Fellowshippanels and judging many other panels, David was the overall winner ofthe 20x16 Competition, with a remarkable perfect score of 100! The judgescommented that the craftsmanship in David's work was remarkable, andthat they were humbled by the stories told. Luke's wedding Fellowship alsoreceived a unanimous pass from the five judges, with one adding that it wasdifficult to find any criticism of the work at all.

Mark Seymour submitted two panels this year, and apparently he is the firstperson in The Societies to achieve two Fellowships on the same day (by a shorthead over Steve Allen!). His first was a Wedding Reportage panel - a difficultsubject to satisfy the judges with. But his unusual approach of presenting thepanel as a timeline of the wedding day found favour, with positive remarks aboutthe storytelling and the print quality as well as an encouraging comment thatThe Societies can really benefit from seeing this kind of wedding reportage atsuch a high standard. And then with his second panel Mark managed to movethe entire room to tears. A Fellowship in reportage portraiture that took hisfathers Alzheimer's as its focus. This candid series of images was Mark's way ofunderstanding and coming to terms with his father's illness and the touchinghonesty shone through. It was a unanimous pass, but not a single judge feltable to comment. For the first time that I've ever seen five judges were renderedspeechless.