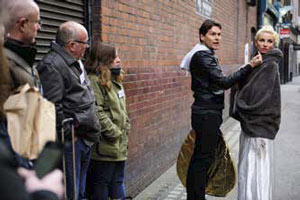 Thursday morning came quickly with Nedine O'Brien's Portrait Avant-Garde panel. Ethereal figures stalked the photos in costumes that Nedine had madeherself. Although she was hoping for an Licentiate qualification, the judgesdeliberated and instead awarded an Associateship because of the standard ofthe images was so high. One judge remarked that the creativity was amazing,another said that the images were just absolutely beautiful.

Anne Algar's Scientific and Nature Fellowship panel was a true showstopper.Microscopic aquatic invertebrates were magnified to epic proportions in herpanel, where she captured details that are invisible to the human eye. The judgeswere gobsmacked over the quality - especially since Anne has devised her ownhomemade rig to photograph with! Both the photography and printing weretruly spectacular, and the Fellowship award was well deserved.

An unusual Maternity Avant-garde panel was up next from Sarah Tate for herFellowship, taking a different style from the usual maternity shots that wesee. Sarah wanted to tell the story that for many couples pregnancy is notstraightforward, and sometimes photography has to reflect these individuals.It was a unanimous pass from the judges; with comments that the prints hungtogether beautifully as a set, and that the panel was very brave. 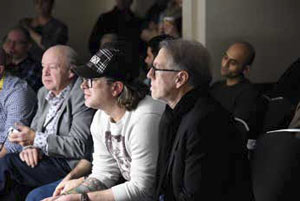 Steve Allen, achieved both his Travel and Nature Fellowships this year. Althoughhe's been judging at The Convention for some time in those categories, he feltthat he wanted to hold a qualification from The Societies for his work in thesefields. Breathtaking, bold, and brave were comments from the judges about hisNature panel. Steve is truly dedicated to photographing wildlife, having visitedover 89 countries and territories in search of fantastic shots - and I'm sure he hasa few more lined up for the future!

Environmental portraiture can often be a tricky subject, but Marilyn Taylorwowed the judges with her images from Namibia. A series of images of threewomen exploring their heritage in the Namib desert. Marilyn achieved herFellowship qualifications with comments from the judges commending her onher beautiful compositions, her use of shadows, and the fact that it looked likea magazine editorial displayed in mounts that were custom cut to size for eachimage.

Last year I had the pleasure of interviewing Vicki-Lea Boulter and in person shedidn't disappoint! Her panel of avant-garde portraits stunned the judges and sawher achieve her Fellowship with a unanimous pass. This really is photographythat has evolved into art, with judges saying it has innovation, originality, and theexperience was like walking through an emotional gallery. Vicki-Lea may havequestioned if there was a place in the industry for her work, but her success as abusinesswoman and her Fellowship certainly suggests that there is!