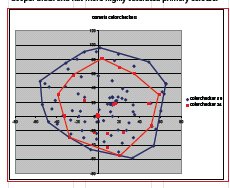 We have conducted a number of trials and calibration tests to discover if the SG is worth the additional cost. At an RRP of £250 it is quite an investment and three times that of the CC24.

The envelope on the outside of the CC SG claims that it contains "all 24 colours of the original industry standard Color Checker". This was only partly true, there was a difference of 5 ΔE between our CC 24 and the same light skin tone of the CC SG. That said, the correlation between the swatches and the reference file of the Monaco Profiler are very close, averaging 2.4ΔE over the 14 skin tones, for example.

GAMUT COVERAGE Self-evidently the additional patches cover the gamut space more evenly than the CC 24 set of colours. However the SG has a slight gloss, which has enabled the total gamut volume coverage to be made larger. The SG runs to a deeper black and has more highly saturated primary colours.

The graph shows the difference.

PROFILE BUILDING Claims are made for "greater accuracy and consistency over a wider range of skin tones". To test this we shot both the CC SG and CC 24 targets under nominally the same conditions and built profiles from each target, assigned them back to the image files and then back-calculated the residual errors.

The first thing that this taught us was just how fiendishly difficult it is to get even illumination across even an A4 target, even when taking the ultimate care and with no time pressures or models present! Eventually we got fed up trying to achieve consistent indoor light and waited for the rain to stop, so we could go outside. 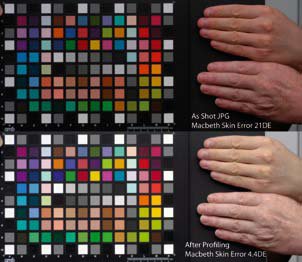 During our initial trials we became suspicious about the difference between the SG chart and CC 24 chart in the standard skin tone for light Caucasians. Apart from the obvious difference in the data values of the reference files, they seemed to be responding differently. The full spectral analysis did reveal a difference and there is an argument to say that the new SG formulation is a better match to the spectrum of real skin, with a realistic dip at the 560nm wavelength range, just where human skin causes a dip due to the properties of oxyhaemoglobin.

In practice this shifted the SG skin tone by about 10° red compared with the CC 24 skin swatch. However, as you will see in a few moments, this difference was insignificant compared with other effects that we observed.

Having been alerted to some of the pitfalls we started on testing but this time threw in two human hands to the calibration shots. The two charts were photographed in dull, full cloud cover (it does not get any more even that that!), using a Nikon D100 and a 55mm Micro Nikkor. Exposure was determined by a Gossen Mastersix hand-held meter and the white balance of the camera was set to cloudy. Both Raw and JPEG files were shot and the exposure was also bracketed.

From these shots the optimum exposure was determined and an as-shot RAW file was saved out for profile building.

The shot used was slightly under exposed - however a good profile accounts for this type of error and under exposure should be the aim of all photographers using digital in variable conditions. The top image is the one used to compute the profile. There is an almost five-fold improvement in the accuracy of the flesh tone - 4.36 from 21 ΔE Lab. We also attempted hand tweaking the image using the shadow, highlight and gamma sliders in Levels (in Photoshop); our best attempt left us at 11ΔE - still a three-fold error penalty. The main issue, correcting with levels, was our inability to effect changes to saturation. Overall then, profiling won hands down (pardon the pun!). 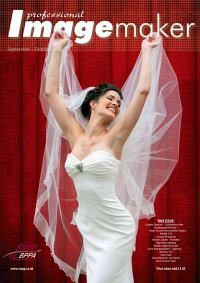