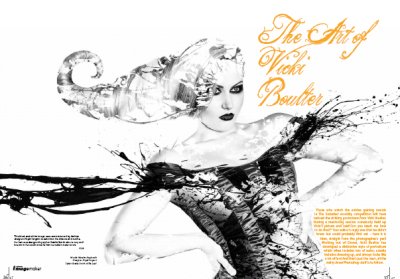 This black and white image was commissioned by fashion designer, Nigel Sargent to advertise his dresses and outfits; the hair was designed by stylist, Estelle Smith who is very well known in the south west for her incredible make-overs. VLB

Vicki Lea Boulter aswpp My otherwise happy childhood was spent coping with an illness that made me look different to everyone else, subsequently I was bullied from a very early age. Drawing, painting, photography... image-making of any kind, was a way of escaping reality for me. The fantasy world I began to create in my head and in my pictures helped me deal with the harsh realities of life in general. Today, I am the same - I express myself through my images and find myself most relaxed and able to work through things when I am keeping busy editing my images.

I became obsessed with contemporary portraiture from a very young age. My love of fashion, make-up, contemporary art and photography grew in my teens and I started to produce folders full of crazy fashion designs and photographs of myself modelling alternative make-up and outfits. In fact it probably went a little too far during the New Romantic era when I started leaving the house wearing make-up similar to the designs I drew and looking like a painted doll. I was hugely influenced by the 80s...Athena posters (I had a poster of Le baiser de l'hôtel de ville by Robert Doisneau on my wall for many years whom I later studied at college, along with Ansel Adams). Photographer David LaChapelle was a HUGE influence on me and I collected copies of Vogue to study his images and be inspired by his way of seeing things in a different perspective. Designer Vivienne Westwood, and my love of artists such as Picasso were also having an incredible influence on me. 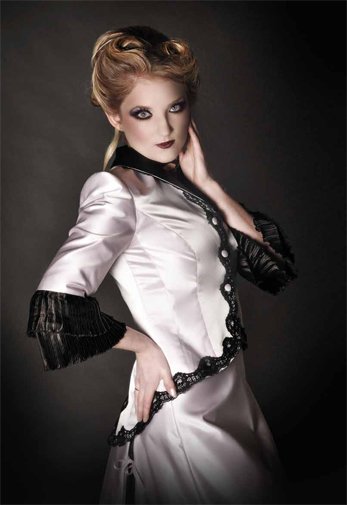 The contemporary record sleeves I collected (and still have)... Visage - 'Fade to Grey', Billie Holiday's All or Nothing At All spring to mind, all very much had an influence on the creative skills I was starting to develop in my teens. The polished, over-edited images I was producing using a mixed medium of photographs, sketches and swatches were just made for Athena posters - if I hadn't have been 13 I would like to think Athena would have snapped me up and given me a job!