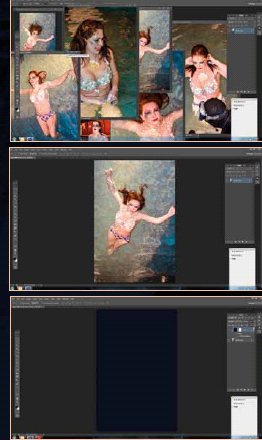 A basic break down of what I did... This 'mermaid' image had been in my head for quite some time. I spoke to model, Rosie Cawthorne about doing it as I specifically wanted a red-head with pale skin as my mermaid. Rosie then spent hours making a shell-covered bra for the shoot although sadly you can not see it a lot in the final image.

The idea was to make her look like she was struggling in net under the sea, a woman struggling with her emotions. We wanted to avoid the romantic images usually depicted of mermaids but portray something so beautiful in a struggling situation. The image was to stir emotion and not sit pretty.

Quick breakdown of production is as follows:
1. I positioned Rosie on the surface, so that her hair spread backwards to get the shot, using an icelight (by Jerry Ghionis/Westcott and launched at the 2013 Convention) for slightly more light from above.
2. I added the fish tail in Photoshop and made the image curve slightly as the idea is to get the mermaid looking like she is trapped in net below the water.
3. Add a layer of main sea colour.
4. Add masking layer, then draw on masking layer all the netting and effects with a combination of brushes including some I have designed myself.
5. Add light and dark areas to sea.
6. Tweak make-up and delete any mask markings obscuring model's face...done!